The Laboratory was founded on the basis of the research group, organized by O.A. Sapozhnikov and V.A. Khokhlova in 1988-90s at the Department of Acoustics, Physics Faculty, Moscow State University.

The first studies were devoted to studying nonlinear waves in weakly dispersive media, statistical problems of nonlinear acoustics, thermal self-action phenomena in acoustic beams, laser acoustics. Starting from mid-1990s the scientific group began to focus its research on problems of medical ultrasound. Since the members of the team were originally engaged in nonlinear acoustics, interests have focused on the use of nonlinear ultrasound waves in medical diagnostics and therapy. In addition, the active area of research during all these years was also nonlinear aeroacoustics, in particular, a sonic boom problem.

At this time the contacts were established with the Laboratory of Therapeutic Ultrasound of the Institute of Health and Medical Research in France (INSERM, Lyon), Applied Physics Laboratory, University of Washington (APL-UW, Seattle), and Ecole Centrale de Lyon  (ECL, Lyon). Together with American collaborators, in the 1990s, the group received a number of grants under the programs from NIH-Fogarty and CRDF. Similarly, collaboration with the French colleagues was supported by grants of the programs PICS, INTAS, RFBR-CNRS, and the co-supervision of the MSU graduate students. These grants, as well as Russian projects (RFBR, ISTC, and RNF) made it possible to equip the Laboratory with modern ultrasound instrumentation - oscilloscopes, power amplifiers, hydrophones, ultrasonic sources, positioning systems, etc.

The scientific team has had many years of fruitful cooperation with the world's major centers for medical ultrasound and nonlinear acoustics. This activity is reflected in numerous joint publications, international projects, mutual visits, joint supervision of graduate students, and successful organization of international conferences, schools, and workshops. 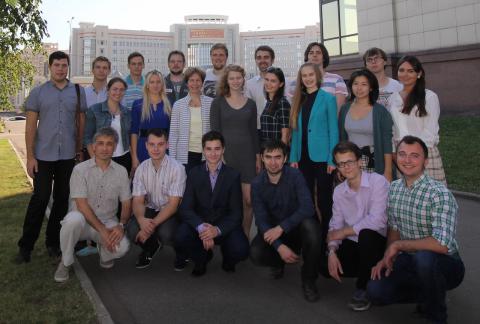 To date, the research team prepared a few dozen graduate students and PhDs. Many of them work at the Physics Faculty of Moscow State University, both in the Department of Acoustics, and other departments of the Physics Faculty. Some students pursue a career in companies and research centers in Moscow and abroad. A new stage came in 2014, when, on the basis of the research group, Laboratory of Medical and Industrial Ultrasound (LIMU) was formed by the order of the Rector of Moscow State University (№727 dated August 7, 2014). Following this order, experimental and office space was provided to LIMU in the newly constructed MSU building "Lomonosov". The field of the Laboratory activity is sufficiently broad; it includes various problems of medical diagnostics and therapy, problems of aeroacoustics, general wave physics, and industrial applications of acoustic waves.